The second set of 注音符號 is by far the most challenging to both speak and hear in my view. I often struggle to hear the difference in these pronunciations and my own pronunciation sounds mostly like Z-Z-Z-Z-Z-Z-Z.


Hearing these pronunciations clearly in the course of daily conversations is really just a matter of time and exposure. Eventually the language will slow down and you will be able to catch the nuances and small variations. Speaking these clearly is a matter of practice, practice, practice... and a really patient teacher, friend or spouse.


Just a couple of quick notes:
Next Post: "Vowels"

Posted by Loukaei at 6:38 AM No comments:

注音符號 - Zhu (4) Yin(1) Fu(2) Hao(4) 注音符號 is a phonetic system (not an alphabet) consisting of 37 symbols representing specific sounds. Each symbol is used in combination with 1 of 4 tones to produce all of the possible sounds in the Chinese language. 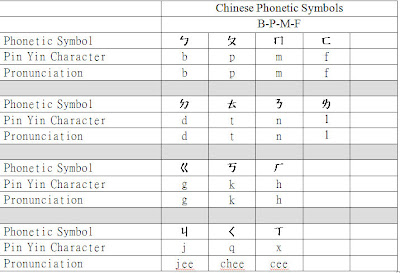 Like most people, I relied heavily on the Hanyu Pin Yin romanization of Chinese characters when I first started to "study" Chinese. It was familiar and easy but it quickly became a crutch that limited my ability to actually learn the characters. I would strongly suggest using 注音符號 as the basis of your Chinese language studies. It may be more difficult at first but after you become familiar with the symbols (which will be quicker than you think) you will learn and remember the characters more reliably, and understand their meaning more thoroughly than if you rely on the pin yin romanization systems.
These are the first 14 symbols and the pronunciation/sound of each. I included the Hanyu Pin Yin romanizations only because they are so prevalent in textbooks and translated literature that they cannot be ignored. The pronunciations in this set are fairly straightforward and familiar to western ears so I am not going to get into any additional explanations of the linguistic technicalities. Next Post: ZZZZZZZ.
Posted by Loukaei at 9:07 PM 1 comment:

On A Path I Cannot See, To Place I Do Not Know, For A Reason I Do Not Understand
So, here we go. I am not sure where we are going, or how or why but I think it will be an interesting trip. I once heard or read somewhere that you really don't understand something unless and until you can explain it to another person. So that is going to be the trick here. I've got 3-plus years' worth of lessons in my head and I think I have a fairly good grasp on most of it. I guess we will now find out how much I grasp and how well I grasp it. In any event, it should be fun.