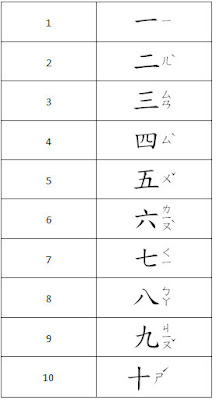 When counting in Chinese, ten is as good as a hundred. Actually, 99 but its close! That's because once you get beyond ten you simply combine the numbers you already know (1-10) to represent the new larger number. Example:


The process is the same for larger numbers as well but we will get into that later.


By the way, "4" (四) is a bad luck number in Chinese. Its pronunciation ("si" 4th tone) sounds like the pronunciation for death (死 - "si" 3rd tone) so most Chinese try to avoid being associated with the number "4" (四). Some housing developments and other commercial buildings will skip the number 四. People will sometimes attempt to change their car license plate number if it has too many 四. Good luck if you are born on April 4, or if you were born April 4, 1944! I guess Reggie Jackson (famous American baseball player) would be in trouble if he played in Taiwan (his number was...wait for it...........


Tip of the Day: To improve your Chinese pronunciation count to 100 (in Chinese!) as often as possible. You will learn how to count quickly and easily AND your pronunication will improve. And don't worry, the paralysis in your tongue and throat will only be temporary.

Next: Looking up characters in a Chinese dictionary (don't panic!)